Ever shared a Google Doc with someone and then realized they were editing your original document when your intention was that they would work from a copy instead?  Did you know that you can force users to make a copy before they can access your document?  This quick screencast video will show you how!

This week’s WWW (Weekly Wednesday Website) is SepiaTown, a website which is integrated with Google Maps to allow you to view historical photographs in their geographical context, and then compare them to what the area looks like now. 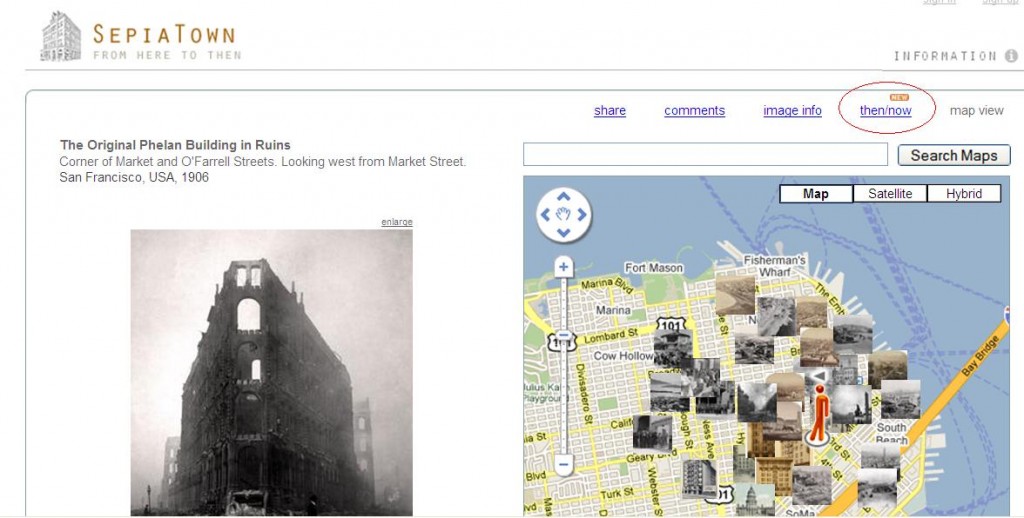 For example, you can click on the thumbnail of a specific location in San Francisco immediately following the great earthquake and fire in 1906, and then use the accompanying Google map to see what the same location looks like now.  Just click on the “then/now” button (see it circled in the screenshot above) in the top right corner above the Google Map.  The screenshot below shows you the comparison. 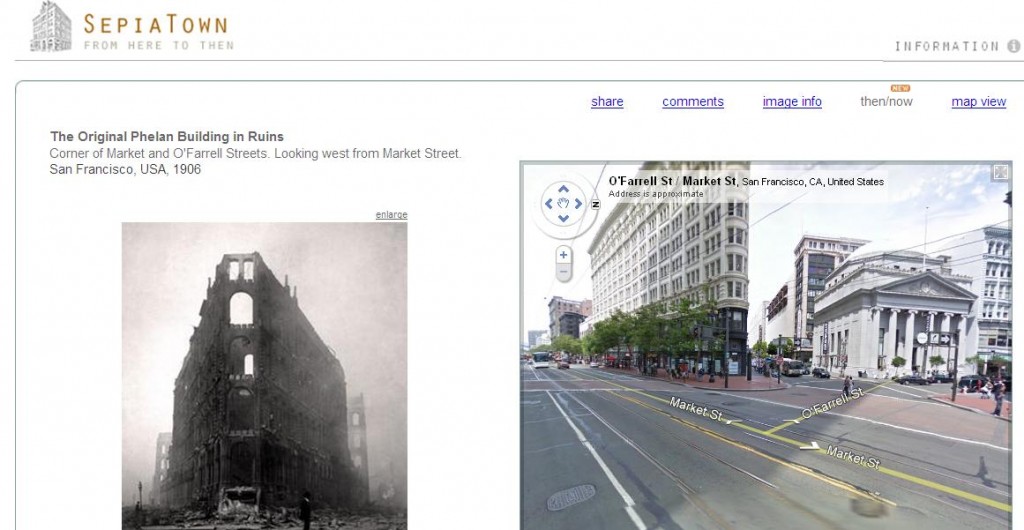 Users are encouraged to upload their own photos to expand the database, which might make an interesting history or geography project for your classroom!

Well, I was planning to record my EdTech Conference experience day-by-day, but that didn’t happen.  I was too caught up in face-to-face interaction Thursday and Friday to take time out for any solitary computer blogging.  I do have some other sessions to report on, though, so here goes.

The first session I attended Thursday morning was an overview of some free Google apps.  The main reason I attended this session was to learn more about the Google calendar, which I’ve been considering using for scheduling the laptop computers and the Media Lab computers at my school.  I’ve heard other media specialists praise it on the SCASL listserv, so I wanted to find out more about it.  I like the fact that my invited users can edit it themselves, because I’d like my teachers to be able to put themselves on the schedule rather than emailing me or worse, sending me notes on little pieces of paper asking if the computers are available.  This is one of the things I love to see technology used for – removing the drudgery of clerical tasks from my daily life.  With my Google Computer Calendar in place, I will no longer have to spend time keeping up with those schedules myself.

What was unexpected in this session was discovering Google Sites, which allows users to quickly create websites that can be made private, semi-public (by invitation only) or public to everyone on the internet.  I like the fact that my pages can be kept in a controlled environment (sometimes necessary in the world of education), but the thing that surprised me about the Google Sites pages our presenter, Karen Minter, has created is that they are ad-free.  I didn’t realize that Google ever refrained from promoting themselves, but according to Karen they do not run ads on educator-created websites.  This was good news, because I really tend to shy away from using sites that run ads of any sort.  After all, if my name is on a webpage, I want to be able to control all of the content that appears there.  (Collaborative work with colleagues excepted, of course.)

For example, I heard about a new webpage aggregator site called Only2Clicks that displays a full-page-view snapshot of all the sites you have stored there.  This was exactly what I was looking for to use with a project I was doing for my teachers, and when I took a look at the site, I loved the design and the layout of it.  However, there were those rows of little Google ads showing up at the bottom of each 2Clicks page, so I reluctantly decided to stick with using my Netvibes aggregator for the project, even though with Netvibes, the link modules are much smaller and harder to read than those on Only2Clicks, and the Netvibes webpage modules show only the top left corner of a website, rather the the entire webpage.  (See an example of what I’m talking about here.)  Hmmm, now that I think about it, perhaps I should take another look at Pageflakes to see how they handle website views.  If anyone out there is using Pageflakes, maybe you could leave me a comment and let me know…..

Boy, I really got sidetracked from describing my EdTech experience, didn’t I!  It’s getting late, and I think this post is long enough; I’ll report on some more sessions later.

Update: 11/11/08  Well, I did try to go back and take another look at Pageflakes, but the site is down, and apparently has been down for at least two weeks.  After doing some research, I’ve found that there is rampant speculation on the web that Pageflakes is gone for good.  Due to financial difficulties, Pageflakes was acquired by Live Universe in May of this year, and the general web consensus at this time is that the faltering company will not resurface.  Too bad.