For my first story time with Kindergarten after the winter break, I decided to share a perfect “after Christmas” book: 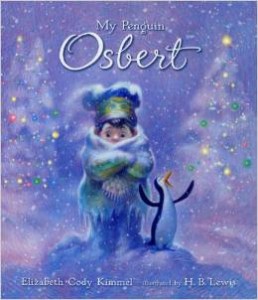 In this amusing book, Joe asks Santa — very specifically — for a real, live penguin.  (There have been some misunderstandings with Santa in the past!)  He is delighted to find exactly what he asked for under the tree on Christmas morning.  But as the days wear on, he realizes that there’s a lot to taking care of a penguin that he hadn’t really considered. 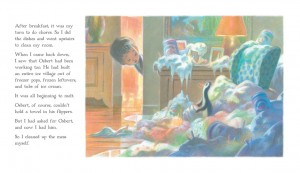 So he writes Santa another letter, and fortunately the solution is easily arranged.

Before sharing the book, I asked the kindergarteners if they had asked for and received something for Christmas this year that wasn’t quite as much fun as they expected it to be.  Sure enough, several raised their hands to shares tales of Transformers that were too difficult to transform (I could totally relate to that one!), electric scooters that were too hard to ride, and a remote control car with a mind of its own.

As we read about Joe’s struggles to do what was best for Osbert, rather than what Joe wanted to do, the kids shared some tidbits of information that they knew about penguins, which is nice preparation for the penguin unit they will begin in class later this month.

I should probably mention that there’s a sequel, too, although we didn’t read it this week.  Maybe for Valentine’s Day! 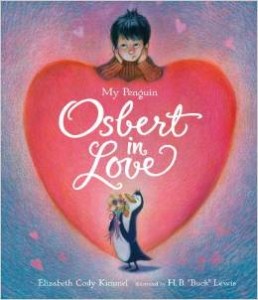 My Penguin Osbert in Love