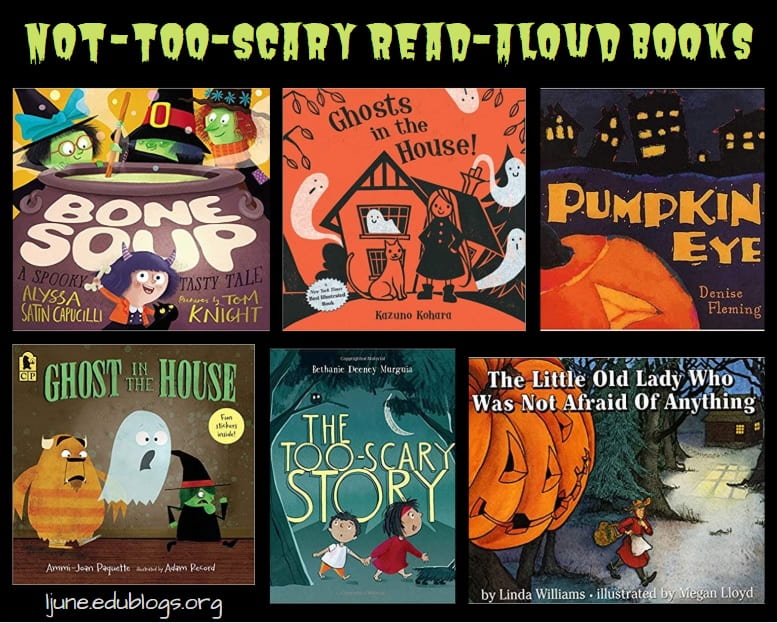 October is the month when thoughts turn to pumpkins, ghosts, witches, and spiders.  Oftentimes our younger students want to be swept up in the thrill of a spine-tingling story, but they don’t want it to be so scary that they actually become afraid.  Here are some just-right books for younger listeners:

Ghosts in the House by Kazuno Kohara
This book became an instant favorite with me when it debuted.  The simple orange, black, and translucent white color palette won it a spot on the New York Times Best Illustrated Children’s Books of 2008 list as well as starred reviews from Booklist and Horn Book.  (Yes, I still remember that 11 years later.  That’s how big an impression this book made on me!)  The illustrations of the girl and her cat reacting to the ghosts and then catching them are amusing, and the sight of the white cat in his black cat costume is delightful.  This one never fails to please young audiences.

The Little Old Lady Who Was Not Afraid of Anything written by Linda Williams and Illustrated by Megan Lloyd
Our title character is traveling through the dark woods when she realizes she’s being followed by some creepy clothing items.  She bravely tells each “You can’t scare me!” until she’s finally confronted by a huge jack-o-lantern who sends her hurrying home.  She ultimately conquers her fear and puts the pumpkin-headed man in his place — literally!  The audience will enjoy repeating the refrain “Clomp clomp wiggle wiggle shake shake” with you, and adding movement to the chant can give energetic children a chance to move a little as well.

Bone Soup: a Spooky, Tasty Tale by Alyssa-Joan Capucilli
The tale of Stone Soup gets a seasonal makeover in this version of the folktale favorite.  The witches and monsters are absolutely not scary looking, but the ingredients (slimy sludge, old toenails) used in their bone soup deliver the “ick” factor nicely.  Bonus: The author includes a recipe in the back of the book listing the creature ingredients and their corresponding human ingredients.  For example, you can substitute 3 Tablespoons of olive oil for the juice of a toad and 2 carrots for wrinkled fingers.  A tasty tale, indeed.

Ghost in the House by Ammi-Joan Paquette
The bouncy, repetitive text in this counting book is just begging to be read aloud, and the titular ghost encounters one surprising creature after another as he slip-slides through the house.  The audience is given an opportunity to guess who will appear around each corner before he/she/it is revealed, and can repeat the “monster” noises that signal each encounter, which keeps them engaged in the story.  Note that this is a lift-the-flap book, so you could even have audience members take turns revealing the surprises. 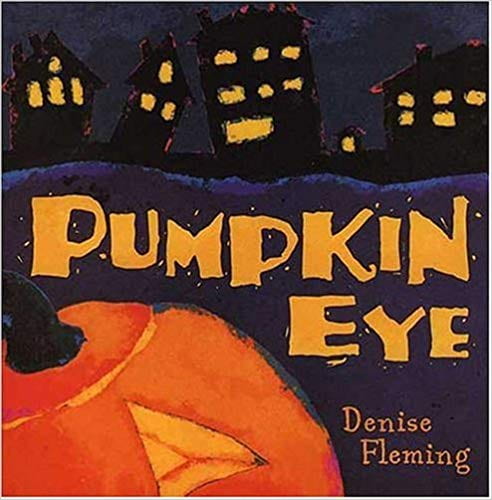 Pumpkin Eye by Denise Fleming
Rhyming books – when done well – make great read-alouds, and this one is definitely done well.  The playful rhymes (toothless hags with tattered rags) will appeal to older listeners as well as little ones.  I’m a big fan of Denise Fleming and her handmade paper illustrations, and the technique is quite effective here. The theme of trick-or-treating has become somewhat outdated as more organizations host fall festivals instead, but the thrill of donning a costume and collecting candy is still a popular one. 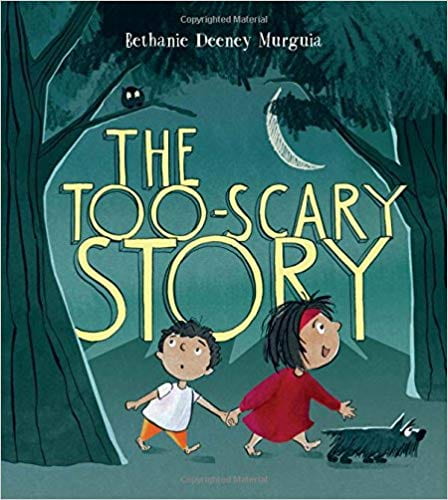 The Too-Scary Story by Bathanie Deeney Murguia
This reads well as a bedtime story, but can also be used for a story time session since there is so much to notice and discuss.  Grace wants a SCARY store but Walter doesn’t want it to be too scary, so every time Papa introduces a plot twist (creatures, footsteps, growling) Walter puts a benign interpretation on it while Grace’s imagination runs wild.  Ultimately the darkness in the room makes even Grace nervous, and Walter finds his courage to confront the frightening shadow.  Bonus: Students will enjoy looking for the little owl on each page spread.

What are your favorite read-alouds for younger readers?  Please share in the comments!