Our most recent story sessions have focused on trees and orchards, so our next logical step was to talk about leaves and the seasonal changes they are starting to go through.

I began with a callback to a read-aloud I used earlier this year: There Was an Old Lady Who Swallowed a Fly by Simms Taback. We re-read that book and used the old lady interactive puppet to re-enact the story, then segued into a different “old lady” book: There Was an Old Lady Who Swallowed Some Leaves by Lucille Colandro. To make sure the students were actively listening, I instructed them to say “ah-choo” every time they heard the word “sneeze.”

Not only did we see leaves on every page of the book, but at the end of the story (spoiler alert!) the old lady sneezes out a scarecrow, which provides another seasonal icon to work with! We had an interesting discussion about the purpose of a scarecrow. A few children knew it was for scaring birds away, while others insisted it was a Halloween decoration. We finally agreed that both uses were important.

After the story it was time to move around, so we learned the Scarecrow Dance using the video for the Scarecrow Song by the Learning Station on YouTube. I almost used the video/song Dance Like a Scarecrow but in the end I preferred the way the “Scarecrow Song” kept repeating and got a little faster each time. That gave the kids a chance to practice the dance, and they really like it when things speed up the longer you do them. 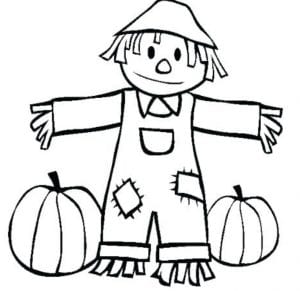 Then we worked on small motor skills with a simple scarecrow coloring page. Some students surprised me with how well they were already coloring, but others were mere scribblers. All were proud of what they created though, as evidenced by their enthusiasm for “show and tell” time when we came back to the carpet to share the pictures. 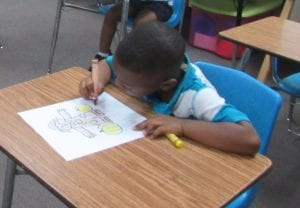 Do you have some good scarecrow resources that you use in your story time sessions?  Please leave a comment or tweet me @LibraryLoriJune