This week during story time I transitioned from farm animals to folk tales by sharing a folk tale about a farm animal. Most young children just can’t resist the story of the Three Billy Goats Gruff, and the group at my school was no exception. 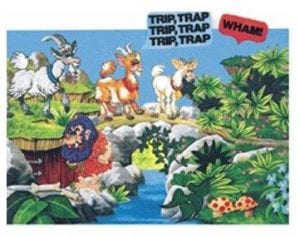 Why is this story so popular?  Maybe it’s because the younger, smaller goats must rely on a bigger and older protector (much as young, small children must do); or because the bullying troll is punished at the end of the story, which doesn’t always happen in real life but is so appreciated when it does; or because the repetitive rhythm of the “trip-trap trip-trap” and the delicious sense of fear when the troll threatens to gobble the goats up is impossible to resist.  Whatever the reason, my audience was literally ROFL when the flannel billy goat butted the flannel troll off the flannel bridge and then stomped on him at the end of the story.

Yes, this tale has a rather violent ending but I’ve never yet shared it with a group who was upset or frightened by the ultimate demise of the troll.  I like using the text of the OLD version (original copyright date 1957) of The Three Billy Goats Gruff written by P.C. Asbjornsen and illustrated by Marcia Brown.  The language really flows well as a read aloud, and the Big Billy Goat Gruff is a worthy hero and defender.

I also used the audio version of The Three Billy Goats Gruff from the EPIC! website. (If you haven’t signed up for a free educators account yet, you should do so immediately.) Playing the audio version while using the flannel board set allows me to focus on what I’m doing or what the students are doing with the figures as we act out the story.

And I actually began the lesson with a nonfiction book about goats from the EPIC! site so that we could review what we remembered about farm animals and then transition into the fictional story. The book I used was titled Goats and is part of the Blast Off Readers series. I like it because it touches on the facts about goats (young goats are called kids, male goats are called billy goats, goats eat grass, etc) that are relevant to the folktale.

I ended the session by having the students line up on one side of our story carpet so they could trip trap across the “bridge” to the library door. The students practiced the littlest goat’s response to the troll’s announcement that he was going to gobble him up: DON’T EAT ME! I’M TOO LITTLE!  Then the troll (aka me) knelt down midway across the carpet and waited for each kid to walk by. (See what I did there?) Some of the students were a little shy about replying to my threat, but most of them loudly told me off before scampering off to “eat their grass.”

Do you have a favorite Billy Goats Gruff story, and/or a creative way to use it during story time?  Please leave a comment or tweet me @LibraryLoriJune and share!