Counting down to Christmas with a new holiday book each day! 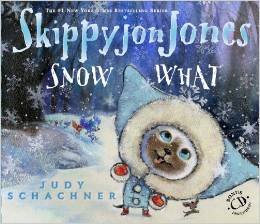 I debated whether or not to include this one in the countdown, because it’s not technically a holiday book; it’s more of a re-imagined fairy tale with a winter setting.  But who can resist a Skippyjon Jones book?

In this adventure, little Kitten Britches is not interested in listening to any old girly fairy tale about Snow White.  He’d rather set out with his chihuahua friends on a search for Snow What, even if it means tangling with a dragon!

Spread from SKIPPYJON JONES SNOW WHAT.

Things you don’t want to miss in this book:

You also don’t want to miss these Skippyjon extras from Schachner’s website.

And you absolutely, positively don’t want to miss this video intro to the book:

And if you’re like me, you’re probably going to want to read all the other Skippyjon Jones books too