I thought it would be less intimidating in terms of creating our own works to begin this summer’s family art study with modern art.  My immediate book choice to introduce the project was Snail Trail: in search of a modern masterpiece

by Jo Saxton.  An art-loving snail with a colorful collage shell invites the reader to follow him in search of a special painting.  We pass several examples of modern art by Jackson Pollock, Salvador Dali, Pablo Picasso, and others before reaching Henri Matisse’s L’escargot (The Snail).  The book ends with a photo of Matisse in his studio and explains that toward the end of his life he turned to cut- and torn-paper art collages, a technique which Matisse called “drawing with scissors.”  The last page credits the other works shown in the book. 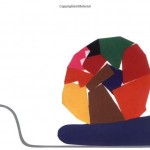 This is a nice open-ended way to expose kids to a variety of modern art styles.  We could discuss the works before looking up the title, artist, and date in the back of the book.  We also enjoyed the way the snail’s silvery trail changed to reflect the type of art shown on each page; a sharp jagged line for the geometric squares of 1940-42 (two forms) by Ben Nicholson, but wavy and fluid next to Salvador Dali’s The Persistence of Memory with its melting clocks. 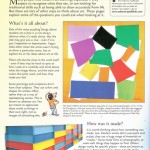 p. 8 from The Usborne Introduction to Modern Art
Click to enlarge.

Then we read a few selected pages from The Usborne Introduction to Modern Art: Internet Linked

by Rosie Dickinson.  The book begins by asking the question “What is modern art?” and gives a working definition complete with examples.  The next section, titled “Looking at Modern Art” discusses Matisse’s The Snail (created in 1953) along with some other examples, and encourages the reader who is trying to understand modern art to think about how and when a piece of art was made as well as what it looks like.  Helpful tip:  “Vague titles often mean the artist wasn’t trying to show a particular scene, but to explore his or her ideas about art or life.” 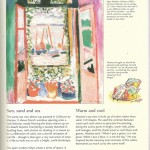 p. 19 from The Usborne Introduction to Modern Art
Click to enlarge.

Next we flipped to page 18 to see a portrait of Matisse painted by his friend Andre’ Derain in 1905, and learned that the style of art Matisse and his associates were creating at this time was so shocking and outrageous, the men were dubbed Fauves, meaning “Wild Beasts,” by critics.  Page 19 shows Open Window, Collioure painted by Matisse in 1905, and explains some of its elements, such as why the walls on either side of the window are different colors, and the artist’s use of space.  I fell in love with the color palette used here; if you want to learn more about the painting (as I did) take a look at this National Gallery of Art page.

We marveled at the nearly 50-year gap between The Snail and Open Window, Collioure  and agreed that Matisse’s delight in vivid colors hadn’t changed in all that time.

By this point we were starting to feel as though Matisse were an old friend, and we were looking forward to learning more about him and his art, and creating something inspired by his love affair with shape and color!

Snail Trail: in search of a modern masterpiece